…we’ve been completely off. Offline: Too little LEGO for a very long time. But without further ado, I am now back. More posts will follow shortly.

Last friday Marie and I went to the LEGO Store, mainly because I got a cardboard box in december for spending more than 400DKK. I got it while buying my Winter Cottage and Winter Market, so yeah I spent a good deal more than 400DKK.
My mind was set to fill that little box to the edge and more. And I did..

This was when I opened it at home. I was quite happy.
I wanted some white bricks, so I stocked up on everything white. (I also filled a large cup with this and that)…

I was amazed of how much I could fit in there.

As you might see on the first photo, we got some Friends set, very unlike us.
But if you bought any Friends set, you got a little bakery stand. Marie was going crazy over the cookie and strawberry, so we did it. We bought some Friends..

There are some good bricks in there, I must admit..

We also got the minibuild from Janury, a snowblower. We actually got two each! 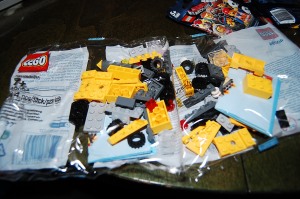 And last but now least we got some Series 12 minis.

I got Wyldstyle and the Guy without pants.

That was our buys, and we spent the evening building and sorting.

Posted by bricklaura in Miscellaneous

A recent issue of the Danish children’s magazine from Disney, Anders And (Donald Duck), included a Lone Ranger polybag with a ranger minifig and a pump car. 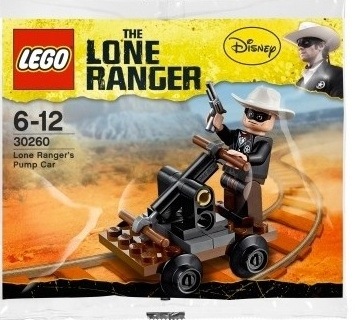 Laura and I went to the cinema with her sister (my sister from another mister 😉 ) to watch the Lone Ranger film – and of course I brought the little guy for a photo shoot!

Posted by brickmarie in Minifigures, News, Our LEGO, Photo shoots

Shell Denmark has started a new campaign with a line of promotional polybags consisting of six cars – two race cars, one truck – and three minifigs with different equipment. The above picture shows the six cars and the paper race track, which doubles as a leaflet with detailed info about the individual cars. I think it looks quite good in the pictures, but the track is neither long-lasting nor a particularly good toy. Below are the figs with the cute Ferrari. Its retro look works for me with its smooth curves and James Bond-ish headlights.

I am also quite fond of the truck, but it cannot actually carry any of the other cars, which would have been cool. The white race car has detals in black, red and yellow, which makes it look German – that’s always popular with me! In general, there is an awful lot of stickers on these cars, as you can tell from the two cars in the front here, but also some pre-decorated bricks. That goes for most of the windshields for instance. I become a nerve wreck every time I have to put on stickers, but I bet it’s even worse for children and people who are all thumbs.

The concept is that you get a car whenever you buy 30 litres of petrol (which costs about 50 € in Denmark) and the minifigs when you wash your car (app. 15 €). My husband went to a Shell the day the campaign began and was allowed to buy all the polybags. Unfortunately he forgot one, which I got to buy at a different Shell station the following day. Of course I sent a picture to Laura who also wanted to get hold of them immediately, but when she went to three different Shell stations she got the same message: you cannot buy them; you have to buy petrol or wash your car. So far I’ve managed to get her two of the cars at the Shell near my workplace, but it seems that it’ll be hard work to get her the rest of the bags.

So good luck to everyone else out there trying to collect them all!

(Did we mention that we are going to LEGOLAND Billund tomorrow?!)

Posted by brickmarie in Minifigures, News, Our LEGO, Reviews