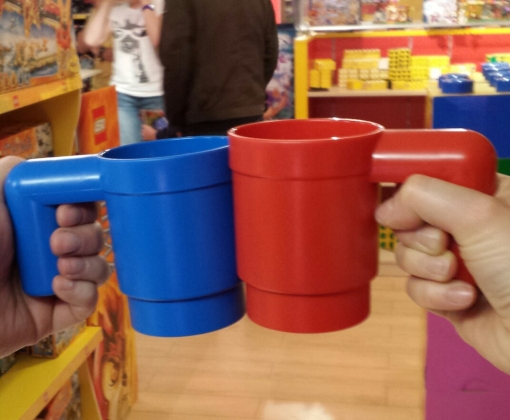 This is Laura and me toasting in the LEGO store at Potsdamer Platz in Berlin. We’re crazy about those cups!
They too are available in a Friends colour, but I’m not too fond of that version.

The blue one on the other hand reminds me so much of my early childhood fun times with LEGO.
There’s just one little downside to the cups; holding that handle is quite awkward. The plastic cuts into your hand and it definitely does not fit into a human hand as well as it does into a LEGO figure hand. 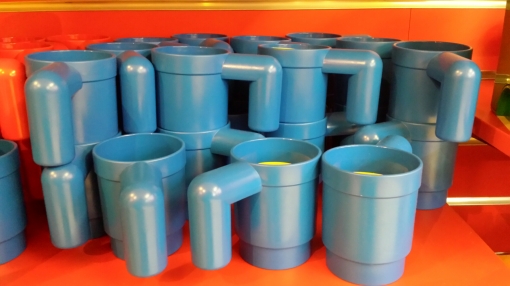 But who cares really? They look great!
Cheers!

Oh, what to do with all those Friends figs I’ve slowly accumulated? Though I’m not a fan of the theme, sometimes I like a set and buy it anyway. I just don’t want the figs. What would you do with them then?

Posted by brickmarie in Minifigures, Miscellaneous, Our LEGO, Reviews

I generally like the City theme, but I don’t think there’s enough change in the police sub theme. Each year a new police station, a helicopter and some different cars. Not that interesting to me. The forest police, however, was quite nice and a great variation with its bears and wooden buildings. Now the quite parallel swamp police is here. And I’m sceptical. Probably because it seems like a lot of work to add a whole swamp to my city.
For Christmas, I got the starter set 60066. And I must admit that it is fun and really good value for money: four minifigures, three animals (one of them a crocodile!), two means of transportation and a 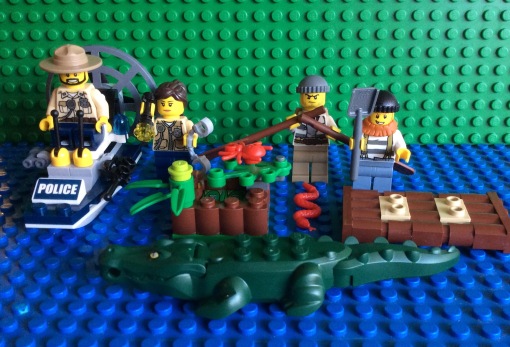 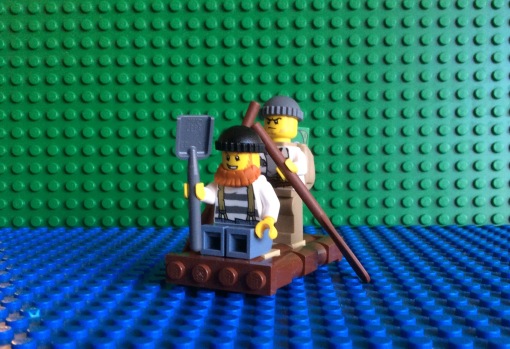 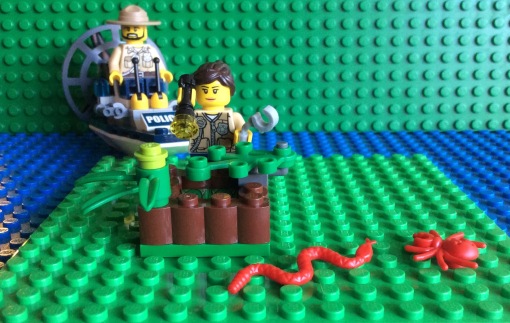 All in all a nice little set. And I might just go ahead and buy more from the swamp theme. What do you think?

Summer in the city – LEGO love

Spring has finally defeated winter in Denmark and the sun has been shining all weekend. Since I am not so fortunate that I have a balcony, my broad window sills and open windows have to make do:

Last week I found the LOTR set ‘Elrond’s Council’ at half price in a supermarket and bought one for me and one for Laura. So that’s what I built in my sun fun moment yesterday.

I think the set is brilliant and great value for money. It’s a central scene with central characters; there are nice elvish details; great bricks for MOCs, you get three (3!) rings (one of which will immediately go on display in my museum MOD) and the ominous presence of Sauron’s all-seeing eye makes the set come alive!

Posted by brickmarie in MOC, Our LEGO, Reviews

With a Ned Flanders word, Mashable once again declare their love for the LEGO Simpsons theme: Diddly-delightful. This time it’s about the 16 collectable minifigures. They have previously praised the Simpsons house set here, here and here.
And I quite agree with them! You really do get all the iconic characters from the cartoon: Itchy and Scratchy, Krusty the Clown, Mr Burns, Milhouse, Ralph Wiggum, Nelson, Apu, grandpa Simpson, chief Wiggum and then the six minifigures from the house set.
I would also have liked Moe, Edna Krabappel, Smithers, groundskeeper Willie and Otto the hippie busdriver, but they had to draw the line somewhere…
Here’s the picture from Mashable: